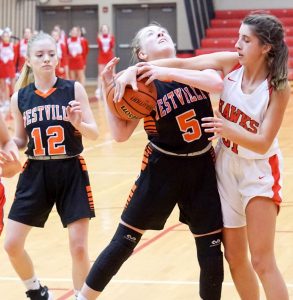 The Westville girls basketball team came from behind to knock off the host Hebron Hawks last night in Sectional action. After trailing by ten at the half, the Blackhawks stormed back to win 53-51. The Weston sisters led the way combining for 35 points on 9 of 16 3-point shooting. Grace Weston had a game high 20 points to go along with 2 steals. Sarah Weston caught fire in the second half and had 15 points and 6 assists. Ashley Hannon had 8 points, Peyton Rodgers scored 6 to go along with 7 rebounds and Nicole Albers added 4 points. Chloe Fortune came off the bench and grabbed 3 rebounds and Faith Baltzell had 2 rebounds.