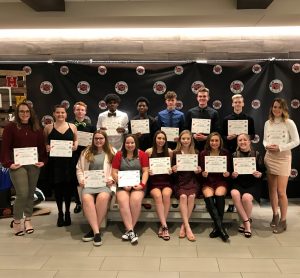 Pictured above are Senior members of the basketball, poms and cheer teams.

Yesterday was the annual PCC Sportsmanship Banquet, attended by members of the Boys and Girls Varsity Basketball Teams as well as the Junior and Senior members of Poms and Cheer. IHSAA Assistant Commissioner (and former Boone Grove Athletic Director) Kerrie Schludecker gave the keynote speech and administered the draw for the Boys and Girls Tournaments.

The boys JV team will play at South Central on Wednesday January 8th at 6:00.

No Events This Week

Events are added by athletic staff.
View All Events